Copyright 2021 - All Right Reserved
Home Metaverse You’ve heard of the metaverse. Here’s what it looks like.
Metaverse

You’ve heard of the metaverse. Here’s what it looks like.

The metaverse is a 3D social network. Instead of a profile, you have an avatar, and so do your friends. Instead of a news feed, you have social hubs where people gather to share news, gossip and play games.

Although the virtual environment is cartoon-like, for Kiernan Pearce the metaverse conjures up its own compelling version of reality — one that, perhaps counterintuitively, can offer richer opportunities to meet and socialize with others than is commonly found beyond the screen.

“I have had more real experiences inside VR than I ever had outside,” the meditation instructor said.

“You are not alone in VR,” she added. “There’s somebody that you can reach out to and talk with. And one of the things that happens naturally is amazing communication and conversation.”

We met inside a colorful, tranquil meditation world that Pearce built in VR. Smiling, Pearce’s picture of life in the metaverse hints at the meaning and social complexity such early converts see in what they view as a natural step forward in the evolution of the internet. 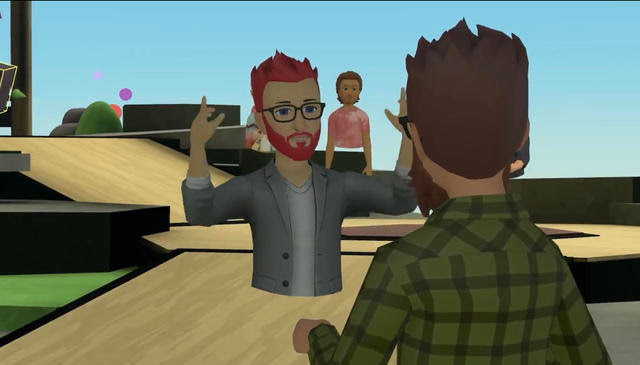 Meta’s Jason Rubin, founder of video game publisher Naughty Dog, says the metaverse will eventually be as common as smartphones and the internet.META, CBS NEWS

“We have comedy clubs, we have discos, we have meditations, we have people who lead world tours. On Wednesdays different creators show off all these amazing game worlds. You know there’s something for everybody here, not just for the gamer. It’s not just for the person who wants to attend events. We have AA meetings here, we have peer support.”

What is the metaverse?

Most metaverse environments will be accessed in virtual and augmented reality. Several companies, including Apple, Sony, Microsoft, and Facebook’s parent company Meta, are working on metaverse products. Experts forecast that virtual reality, a $30 billion market in 2021, will more than triple to $300 billion by 2024. 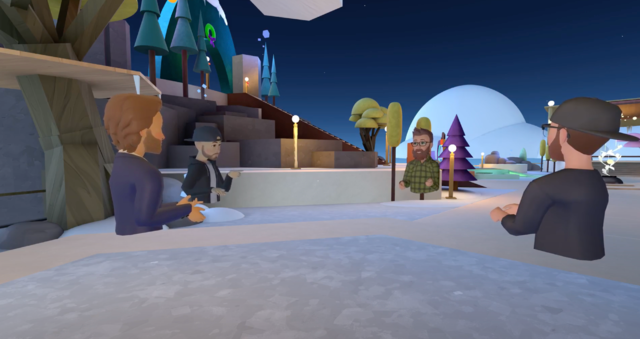 Many other applications of the technology are in the works. For example, Seoul, South Korea will construct a virtual replica of the city as part of Seoul Vision 2030 plan. The virtual environment will be designed to help residents communicate with city officials, join community events, and visit museums and reconstructed historical landmarks. The city says their metaverse will take a decade to construct and be accessed with VR and AR headsets.

One of the most active metaverse environments is called Decentraland. It’s easy to access with a regular web browser. There are currently about 300,000 active users, with some estimates showing the virtual space is gaining about 18,000 users per day. Samsung recently unveiled their latest smartphone in Decentraland and opened a virtual shop.

Meta’s “Horizon Worlds” is in VR and accessed with an Oculus headset. Much of the virtual environment is created by experienced video game programmers. But in Meta’s virtual universe everyone has access to the same tools, which means anyone can build a virtual world to hangout or play.

“I’m a website developer by trade,” Pearce said. Coding skills are helpful in the metaverse, but not essential. “VR is more accessible. I can build a world that has any number of effects in how it looks and sounds. It’s a more immersive experience.”

“Not only are the tools there for everybody to use, but everybody who is actually interested in making games already has the basic structure and framework” to launch a game and attract an audience, Rubin said, adding that many of his colleagues working on Horizon Worlds have experience building video games.

Meta also provides training for users to build virtual worlds. The tools include a variety of shapes, texts and sounds that users can stitch together to create a 3D world. Advanced features allow users to add codes for behaviors within the world like making a football fly across the field when it’s thrown.

“When we strap an economy onto that, the ability to actually make money from doing it, I think we change the world,” Jason Rubin, vice president of Metaverse Content at Meta, said of the goal to let users profit financially from content they create in virtual reality. META, CBS NEWS

John McLay said he learned to create a virtual world in a matter of days but spent more time learning advanced tools for designing complex environments like a moving train.

“I didn’t come from a programming background, but once I made a couple of breakthroughs in scripting it was just smooth sailing from there on,” McClay said.

Meta CEO Mark Zuckerberg last week announced a new feature that will let creators use voice control during the world building process. During a live-stream presentation, the Facebook co-founder created a basic virtual world set on a beach using only his voice.

Rubin said that “over time, the variety of things you can do will expand greatly” in the metaverse, adding that it “will slowly increase to the point where we really become an immersive world.”

Outside of Horizon Worlds, games created by professional studios are also making a big impression with users. Meta said consumers last year spent over $1 billion on the Oculus store for video games. Resident Evil, a popular zombie survival game that was created for the game cube nearly two decades ago, is now the fastest-selling game on the Oculus store, according to Rubin.

Additionally, Meta said eight games generated over $20 million in revenue in 2021, with more than 120 virtual reality games bringing in revenue in the millions — a number that doubled from 2020.

Rubin said the next step is to give users more freedom to create and collaborate while adding tools to monetize the products designed by amateurs in Horizon Worlds. From clothes for avatars to cars for video games, creators should be able to profit financially from the products they make in the virtual world, he added.

“When we strap an economy onto that, the ability to actually make money from doing it, I think we change the world,” Rubin said.

As Meta works to shift from a social media platform to a virtual reality company, safety and privacy experts worry that some of the same issues haunting the company in the real world might carry over into the metaverse. The company announced a change in its corporate name from Facebook to Meta in October, just weeks after whistleblower Frances Haugen released thousands of internal documents that showed company executives ignored the public harm caused by its social media platforms.

In a December interview with CBS News, Haugen warned that the same issues that plague social media are likely to afflict the metaverse. Days later, a user reported that she was verbally and sexually harassed within minutes of using Meta’s product. With such concerns in mind, Meta said earlier this month that everyone will have four feet of space around their avatar and others will be prevented from entering this personal space.

“The worst-case scenario is that we don’t learn anything from previous versions of the web, and we just move over those business models and that way of being,” said Alexandra Givens, CEO of the Center for Democracy and Technology, a nonprofit group that focuses on issues including privacy and digital rights. 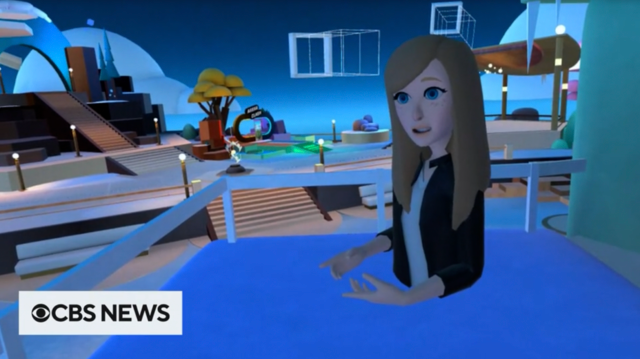 Alexandra Givens, CEO of the Center for Democracy and Technology, says consumer biometric data can be misused by VR companies.

More specifically, Givens raises concerns about how companies could seek to use biometric data gleaned from metaverse users, such as pupil dilation or arm movements.

“We need to think about how that data is being collected and what the regulatory landscape is going to look like,” she said.

In 2003, software developer Phillip Rosedale launched a proto-metaverse called Second Life. By 2005, hundreds of thousands of users had logged millions of hours building content, trading digital goods and playing games in the virtual world. Second Life was so popular that it was on the cover of Business Week, and the news agency Reuters built a virtual bureau to cover events inside the digital world.

Like a lot of social networks, Second Life was hot until it wasn’t. Users routinely alleged sexual harassment. The developer, Linden Labs, also couldn’t scale the tech infrastructure to meet demand, and the code had a number of security flaws. A decade after its launch, Second Life was a virtual ghost town. 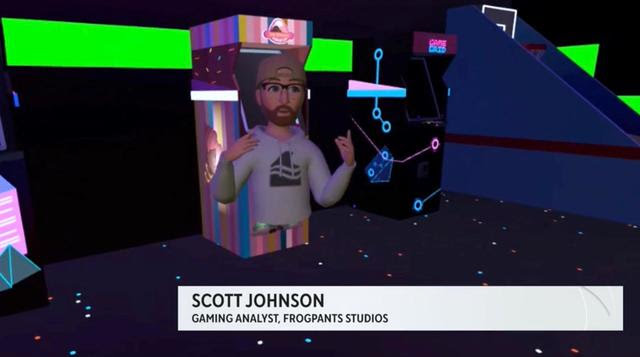 Meta’s Rubin is confident Horizon Worlds, Decentraland and other metaverse environments won’t experience a similar fate. “Now, pretty much everybody plays video games, but they don’t necessarily call themselves gamers” because they play on their phones instead of a PC or console, he said.

As with any new tech, skeptics abound, he added. but in Rubin’s view VR and the metaverse will eventually be unavoidable.

“It’s key to understand that you don’t have to necessarily want it or think that you’re a [metaverse] type of person for it to sneak up and just become fun, useful or otherwise part of your life. If you don’t think the metaverse is going to happen, that’s fine. I’ll be here when you are.”

Could The Metaverse & Web3 Save Sustainability?

Defining The Metaverse And The Future Of Physical...

Reinventing yourself in the Metaverse through digital identity

Masters of the Metaverse