Top Posts
Busting The Myths Of The Metaverse
What Does Gen Z Think About the Metaverse?
Asynchrone Realität: ETH Forscher halten Zeit in der...
GigXR Partners With ANIMA RES to Scale the...
How Will Businesses Take Advantage of the Metaverse?
Managing Data In The Metaverse: Four Lessons From...
Ringier-CEO-Avatar wirbt für Metaverse
BMW Group und NVIDIA heben virtuelle Fabrikplanung auf...
Can you truly own anything in the metaverse?...
Meta’s Next VR/AR Headset Will ‘Replace Your Laptop’ 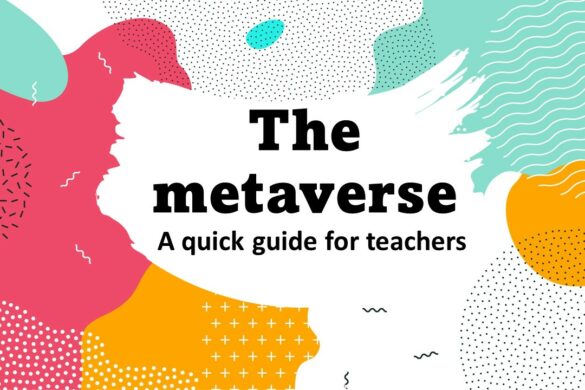 Ever since Facebook announced its vision for their metaverse on 28 October 2021, including the company’s name change to Meta, there has been a buzz about what it might mean for the future of the internet and our digital (and real) lives.

Of course, this announcement was set against the recent warnings from a reputable whistle-blower about the harm the social media company is doing including to children and young people through its algorithms that shape user beliefs and behaviour, and inadequate moderation of harmful content.

This blog post unpacks the idea of the metaverse, taking into account Facebook’s vision but also extending beyond it, to understand its history and highlight some implications for teachers.

Where does the term metaverse come from?

English teachers – You Are Up!

The term metaverse was coined by Neal Stephenson in his 1992 cyber punk novel Snow Crash. It referred to a computer generated universe.

Snow Crash is a rollicking sci fi read that has fired-up the imagination of those interested in possible technology futures with its fascinating portrayal of the persistent immersive 3D digital world of the metaverse that can be jacked into through a personal headset or public booths that produce a lower grade, glitchy avatar. In fact, the novel popularised the word avatar. It also highlighted the dangers of corporate and government control of knowledge and its infrastructures, dreamt up a devastating hybrid DNA and digital virus, and featured deadly semi-autonomous weapons called ‘rat things’.

An aside: For an earlier version of the metaverse, but this one was called the ‘matrix’, see William Gibson’s (1984) Neuromancer, a dazzling tale about a VR universe inhabited by mastermind AIs that influenced the Matrix film trilogy (soon to be quadrilogy).

What will the metaverse be?

The idea of the metaverse extends beyond Facebook’s (proprietary?) influence and has been described as a spatialised interoperable version of the internet. At the moment no one really knows what the metaverse might be like although there are current smart glasses, persistent VR spaces and gaming sites that provide a window into social, commercial, communication and creative aspects of it. Users will probably connect with the persistent interfaces, spaces and layers of the metaverse using a VR headset or smart glasses or on a screen (or with some type of yet-to-be-invented hardware that can integrate aspects of these). There is also a future vision, and investment into research, for direct human brain-computer interface. The metaverse will be populated with people in avatar form and by AI-powered virtual characters in human and other forms.

Here is a description of what the metaverse might be:

“The metaverse is the idea of a shared digital universe in the cloud created by merging virtual spaces that are physically persistent together with augmented reality (AR) layered over the real world. The metaverse is singular because the concept includes the sum of all virtual and online worlds along with all AR layers enhancing the physical world… Besides games and hangouts, it will include social media platforms, workplace tools, investing resources, online shops and much more. You’ll be able to immerse yourself completely in this spatial internet using virtual reality (VR) technology or just interact with bits of it that are layered over your physical space via AR. Instead of a profile picture, you’ll be represented by a complete digital avatar or persona. You’ll be able to meet up with your friends’ digital personas and wander around visiting virtual places and attending virtual events.” https://history-computer.com/metaverse-the-complete-guide/

For those interested in how Facebook’s metaverse might be designed in stages see this excellent article from Avi Bar-Zeev, veteran developer of and commentator on all things eXtended Reality (XR).

What does the metaverse mean for teachers and students?

1. Be curious but don’t believe the hype: There is a fair bit of publicity around the metaverse, and this will infiltrate the EdTech space – just remember that the metaverse isn’t here yet (at least in a scaled-up interoperable way), and some suggest it may never arrive. So, it’s good to be intrigued without buying into the hype.

2. Keep up with current research on immersive learning: We are still in the early days of building the evidence base for the effectiveness of immersive technologies for learning using headset-mediated VR and augmented reality experienced through glasses or via screen, especially in schools.  Results are promising but ongoing rigorous research is needed so that we can confidently embed immersive learning into school classrooms in ways that make pedagogical sense and align with curriculum across subject areas. Asking questions about the evidence base and keeping up with the research on immersive learning is vital as knowledge about this will allow us to ask the right educational questions as the metaverse evolves.

3. Get interested in the (dry) but important areas of privacy law, digital legislation and regulation, and AI ethics: The idea of the metaverse only amplifies existing concerns regarding the automated harvesting, sharing and use of data without user consent including biometric data which is about and of the user body (facial recognition, pupil dilation, gaze and movement tracking etc.) and which can be highly identifying. There are many different forms of biometric data and plenty of biometric harvesting tools available and so we need to watch this space carefully. Automated nudging of behaviour and the affective moods of users will be diffused through the metaverse as current visions see this as a place to advertise and sell products to us as well as collect our personal data in ways which will be highly embodied and emotional. The inclusion of cameras in smart glasses and VR headsets adds another layer of complexity to maintenance of privacy. The Internet of Things will seamlessly fuse with the Internet of Bodies creating legal, ethical and social dilemmas for all of us, personally and professionally. Children and young people will be differently impacted at each stage of their physical, cognitive, moral, and social development. The teaching profession needs to ask who will regulate the metaverse, define its standards, and build and control its infrastructure and content, as this should inform decision making on procurement of technology for schools. No teacher wants to bring unethical technology into the classroom and so we need to start understanding and applying ethical frameworks now and into the future as the metaverse merges with aspects of our everyday lives in work, leisure and learning.

4. Empower children and young people to have a say in what the metaverse should be: Look for places in the curriculum where students can investigate and use the technologies related to the metaverse as well as explore public and industry discourse about its ethical and social implications. Such opportunities should expand the boundaries of digital literacy education to take in civics and citizenship, the environmental impacts of technology, ideas about human-machine relationships, and re-formed conceptions of learning, creativity and identity in the new machine age. Some industry doyens, such as the CEO of the child-targeted Roblox gaming platform which has 42 million daily users logins, suggest that children are already in a proto-metaverse and that one day such platforms will be pivotal to a metaverse providing everything from learning, shopping and business communication tools. Schooling systems rarely recognise the digital leisure life of children and youth, and yet industry is watching and factoring this into their plans for the metaverse. It is important that we as educators facilitate children’s critical engagement and agency in this space so that they are not viewed just as consumers or as data points. The voices and visions of children and young people should be integral to shaping a metaverse which upholds human rights including the rights of child.

The post bought to you by A/Prof Erica Southgate who is looking forward to having a snazzy Star Trek Borg avatar in the metaverse. 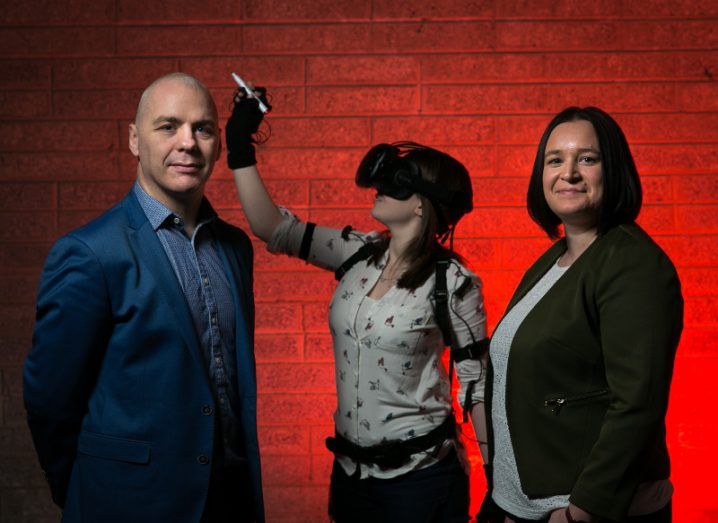 VR Education raises €9m to build a ‘metaverse for business’

The Waterford company plans to double its workforce from 60 to 120 as it builds out this new virtual reality offering for customers.

Waterford virtual reality company VR Education has raised €9m in a share placing to build a “metaverse for business” in VR.

VR Education, which is listed on Euronext Dublin and the London Stock Exchange, raised the funds through new shares placed by Davy and Shard Capital Partners.

Chief executive David Whelan told Siliconrepublic.com that the company is planning to build a new product for businesses that he describes as an “always-on persistent world”.

Its VR platform, Engage, was initially designed for education and corporate training but since Covid-19 hit, the company has seen an uptick in demand from enterprise clients.

“They were asking us for additional services. They were using us for business meetings and sales events and they actually want more of an outreach where they can offer services to the general public. So what we’re building is an always-on persistent world, a metaverse for business,” Whelan said.

This would allow businesses to build virtual environments that are constantly operating where users can come in and avail of different services.

“You can go into the lobby area which is open access. The employees then have access to the private locations in that building where they can go into meetings and conferences,” he said.

“There’ll be locations branded by the companies themselves and you can walk around those locations but then if you want to get services from those companies, you can then purchase those services in this always-on metaverse.”

VR Education, which raised €3m from HTC in 2020, plans to launch the new product next year. In the meantime, it also plans to double its workforce from 60 to 120 over the coming year, mostly in tech roles. While the company is based in Waterford, it plans to hire around Ireland on a remote basis as well.

Whelan said the company reached 100 commercial clients over the last year despite the pandemic disruptions. One of its most popular products has been a VR learning tool detailing the Apollo 11 moon mission.