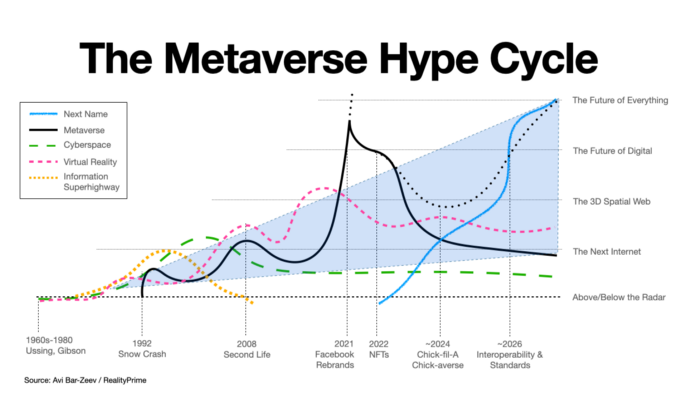 We’ve seen a lot of ups and downs with various terms in Spatial Computing. Ironically that umbrella term has remained largely below the radar. I recall us first using it around 1992 in a startup, but who knows how far back it goes?

The question du jour (or de la décennie) is how all this Metaversal stuff pans out in the public’s mind over time. What will we all call it in 5–10 years? More importantly, what does it do and not do?

To understand all that, it’s worth a look at the various other terms we’ve used and how they all tend to ebb and flow and are overtaken by something new, but always stay within some general boundaries. I’d argue the reality (the blue shaded area in the graph) is the integration of all these terms, high and low, not any single one of them.

In the 90s, The Information Superhighway lead the nightly news broadcasts the way Metaverse does on the modern equivalents, TikTok and YouTube. The level of depth reporting is the only thing that stayed the same.

Then as The Web formed in the 90s and early 2000s, saying WWW (or dub-dub-dub) was too cumbersome, so we picked Cyberspace for convenience, and “surfing the web” colloquially. Cyberspace apparently goes back to the 1960s and was popularized by William Gibson for another kind of vast shared 3D information space. Today “cyber” is more about security than spaces.

Virtual Reality has been around as a term for close to a hundred years, almost, but was more popularized in the 1980s with VPL and again around 2008 with the peak of Second Life, and again in 2014 with the acquisition of Oculus for 2–3 billion dollars.

We all know the literary origins of The Metaverse in 1992. But if you plug the term into Google Trends, you don’t see much traction until two years ago. Now it’s dropping off again.

Will Metaverse truly be the accepted term now and forever?

It has several things working against it. First, the company formerly known as Facebook all but claimed it in their re-branding, spent $70+ millions doing so. Did they want us thinking of them every time we say the word? Or do they want deny its use to competitors?

There are a lot of people hoping, praying, they’re not the ones to bring the future to us, at least not with the current business model.

Second, you have people saying things like “Paris Hilton is the Queen of the Metaverse.” (note: she said it herself).

They’re talking about NFTs, of course, so she’s apparently the queen of shilling 2D images you can claim to own.

Let’s dispense with the fake royaly, if we really care about democratization and not plutocritization (more rule by wealth). I’ll quote myself here too:

But on the other hand, we don’t yet see a good alternative term, do we?

Last fall I proposed a term to use (http://www.coreality.com) where I’ll even donate the domains to whatever group can best protect them for the commons. But the goal here is not to make the next ultra-hyped term, but rather to keep something safe from all the hype. In other words: boring.

But I also predicted at the time that most people would just go with some variation of Web3 + 3D, like the older “Web3d” or some such. We’ll see how that turns out. I don’t pick the names. I just speculate a lot.

Here’s the original chart again. Notice each term rising and falling in time for the next term to take over. For full clarity, my graph isn’t based on any scientific sampling, but is just a decent storytelling of what we’re seeing thus far and maybe beyond. In any event, Metaverse clearly hit a giant peak in 2021 and is coming down fast, propped up only by the likes of fake royalty and a thousand third-hand news reports.

Will Metaverse continue to drop off, or will it rise for a third or fourth time? (legend: the black dotted line)

I think that largely depends on whether people like what they find in it, and if that happens soon enough to keep their attention. On the other hand, if it sucks or takes too long to materialize, we can pretty much assume the next big thingwon’t want to be associated with the word Metaverse.

“We’re the shmetaverse, not that old crap. Totally different.”

But one thing should be clear from the diagram — whatever “it” is, it lands somewhere between “The Next Internet” and “The Future of Everything.”

Will the NFT bubble burst first? Will more than a dozen million people ever spend most of their time in Second Life like virtual worlds?

Certainly when it comes to games, we can see at least a half-billion to a billion players easily. But what’s the thing that lets eight billion people continue to live their first lives while better connecting digitally to each other as needed?

Personally, I don’t think that thing has truly been named even yet. And I don’t think it really takes off until we solve for the same kind of standards and interoperability that allowed the WWW to take off in the 90s and 2000s.

I figure that’s still a few years out, given the current pace of standards work and the requisite ubiquity of comfortable new hardware to support it. I’d guess 2026, but the standards and devices are coming in waves too.

Whoever solves this vertically could become the next Google, a term now so generic it replaced the word “search.” Or, if we solve for this collectively in a more decentralized/democratic fashion, we might decide that despite the really horrible uses of the term Metaverse so far, there’s really nothing better rolling off the tongue, that Stephenson created his own mental meme virus.

At least until there is something better. Because the history of this space is full of terms rising and falling, and not a single one of them has ever really stuck long-term.