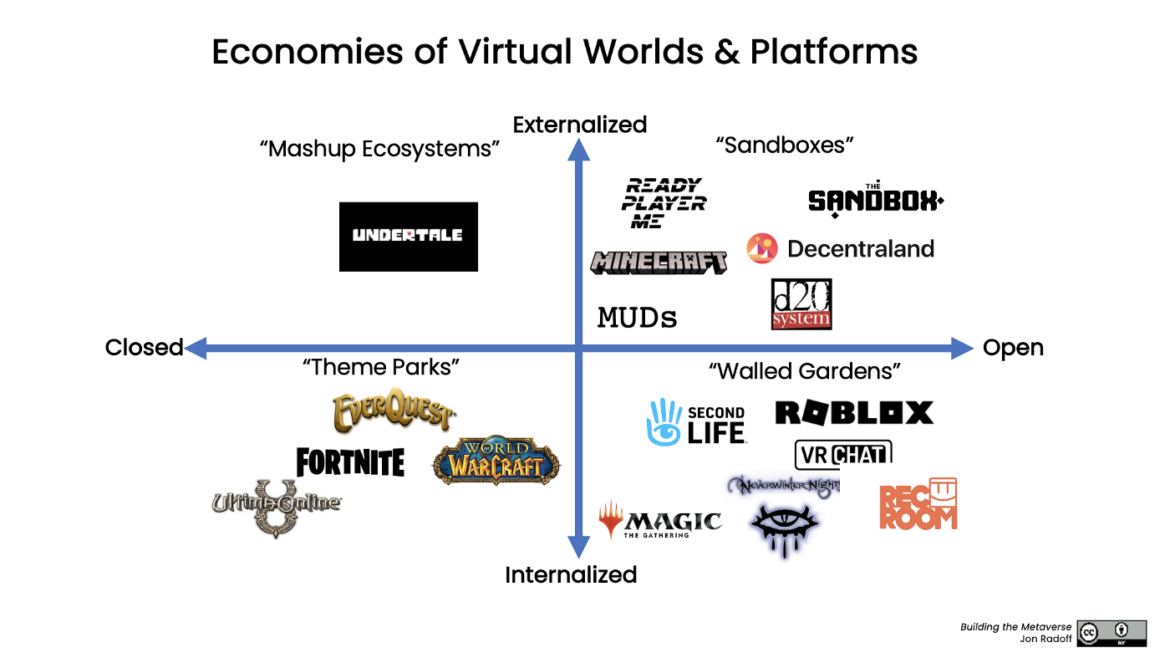 Economies in virtual worlds have a large number of distinguishing characteristics. This ontology attempts to describe them in terms of two of the important ones: an open <-> closed axis, and an externalized <-> internalized axis — and then place a number of worlds into this structure.

An open economy is one in which creators other than the original world (or platform) can contribute back to the world’s ecosystem in some meaningful way.

A closed economy is one in which the ability to create is largely constrained to the original platform’s creator.

An internalized economy is one in which all of the economic activity takes places within the platform itself — there’s no significant interoperability that enables the exchange of creativity beyond the confines of the original world.

An externalized economy is where economic activity is possible beyond the original platform, or between platforms.

Using this structure, we can describe a few of the types of economies that exist.

These are systems in which creators can fork the original platforms, make their own versions, create content within them, share them with other people, and create bridges between worlds and/or avatar systems.

These are worlds in which you can create new content, worlds, experiences — and the economy (such as currency systems, rules, purchasing) is controlled by the platform’s creator.

These are worlds in which the creativity is largely constrained to what you can do within the world as a player (e.g., customize your character, livestream your gameplay, or modify the user interface).

This is where the a creator defines the building blocks (characters, setting, etc.), and an ecosystem of fans emerges that reworks the content in new ways.

Other Methods of Comparing

There are a few other ways we could compare virtual world economies and many of the “metaverse” type things people are talking about. Here are a couple of others I considered (and I may map these out in the future):